Call me bitter, because I didn’t come up with some piece of shit equipment that promises the world but doesn’t do a fucking thing.  We are a long way from the 80’s fitness explosion of useless devices cleverly marketed to fat-asses watching late night TV who excel at eating and buying shit they know they really aren’t going to use.  Sadly, decades later, the only difference is we now have more fat-asses (usually on disability from a disease directly correlated to being fat) who continue to buy these ‘made in China’ tchotchkes.  Was I guilty of signing up for Blll Phillip’s EAS line of supplements back in the day and dropping more money than I made on substances that were supposed to jack me up?  Yes. But I was capable of using at least a small portion of my brain and learned how to exercise without using some miracle gadget that would supposedly get me ‘swole’ in just a few minutes a day.

There are tons of items dating back to your date of birth that you will probably hear about being sold on the local swap shop show, but I’ll start with a relatively new and novel idea that truly sucked.  If you or someone you know owns a Shake Weight, I recommend you give me $20 while I punch you in the face.  Apparently it took off when a news anchor took a liking to the very similar masturbatory movement one of the exercises required.  Several million youtube hits later, and reportedly over $40 million in sales later, this ‘groundbreaking’ workout device is one of the best selling pieces of shit ever sold.  You now wonder why when traveling abroad Americans tend to get dumb looks.

Shaped similarly to a vibrator, I especially like their claim of “scientifically proven to get results in 6 minutes a day!”   Something tells me as soon as people heard 6 minutes a day, they were sold.  With lazy people comprising well over half the population, it’s no wonder they will throw down, with no regard of price, for something that will give them a shortcut in life.  Sorry fine citizens, you may or may not have already learned that there are no shortcuts.  Achieving and maintaining optimal fitness is like running a race with no fucking end.  The sooner you learn this, the less money you will burn over your lifetime on shitty equipment that doesn’t work.  Stay tuned for more terrible fitness gadgets that made someone a shitload of cash, while guiding you even further from your goal weight. 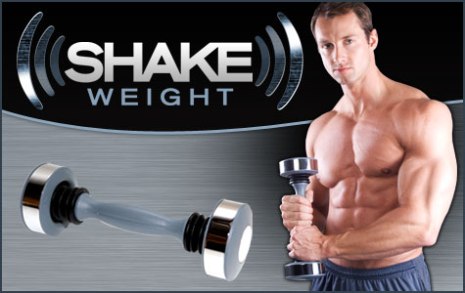