By my calculations, I must have eaten close to a half mile’s worth of Subway sandwiches in my day.  That is a shit load of subs, you might be saying.  But when I was a youth, I had the opportunity to use possibly the best coupon ever created in the fast food industry.  If I had to guess, I would say I saved close to a thousand dollars by using the “Buy one, get one free” coupons.  Yep, I ate both in one sitting.  And of course they were both footlongs because you cannot call yourself a man if you order the six-inch.  In my never-ending quest to get huge, this was the perfect way to mow down more excessive calories than I could count.  Mind you, when I first discovered Subway sandwiches in the 1980’s, they used real meat.  It’s been many years since I made my way into one of these restaurants, which is very difficult these days seeing how they seem to be on every corner. My last footlong sub came in the form of a grilled chicken breast on whole wheat.  I had cut down my consumption of this supposed healthy fast food after reading many unflattering stories of the mystery meat they were using as the company was growing like wildfire.  Don’t get me started on the meatballs (there is a reason why it’s the cheapest sub on the menu).  One day I found myself in a pinch. Instead of doing what I should have done, which is not eat, I end up giving in to the “Way”.  As I watched my sandwich artist make my sub, I couldn’t help but notice the grilled chicken’s perfectly placed grill marks across each slab of meat as if they were drawn on with a marker.  It appeared that each piece of chicken seemed to be exactly the same size as the next, almost as if they were cut from an oval-shaped log of this “chicken breast” in the back room.  I  politely declined the double meat option, and went for all the vegetables.  I then watched as this artist turned into a robot placing 4 pieces of every vegetable on my sandwich (except of course for the iceberg lettuce that they piled on).  Once they wrapped it up and placed it into a bag, even though I said I didn’t want one, I was ready to finally enjoy my late lunch.  I took just a couple bites and then realized that this was the most bland sandwich I ever had.  There was no taste, and I had no fuckin’ clue if I was eating chicken, steak, or fish.  If it wasn’t for the salt and vinegar potato chips, I would have been pissed.  How that fatty named Jared still eats this shit I’ll never know, but something tells me his whole story is a scam and he was never fat to begin with.  He probably just had a very large brother named Jeremy.  I choked down the rest of my tasteless sub because, like any guy, I eat whatever the hell is put in front of me until it’s gone.  I learned that Subway may be healthy compared to the other shitty fast food choices, but it tastes like ass.  Next time I’m going to opt for pizza. 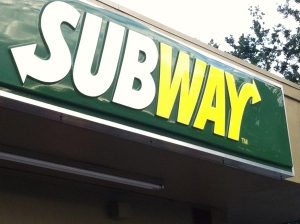